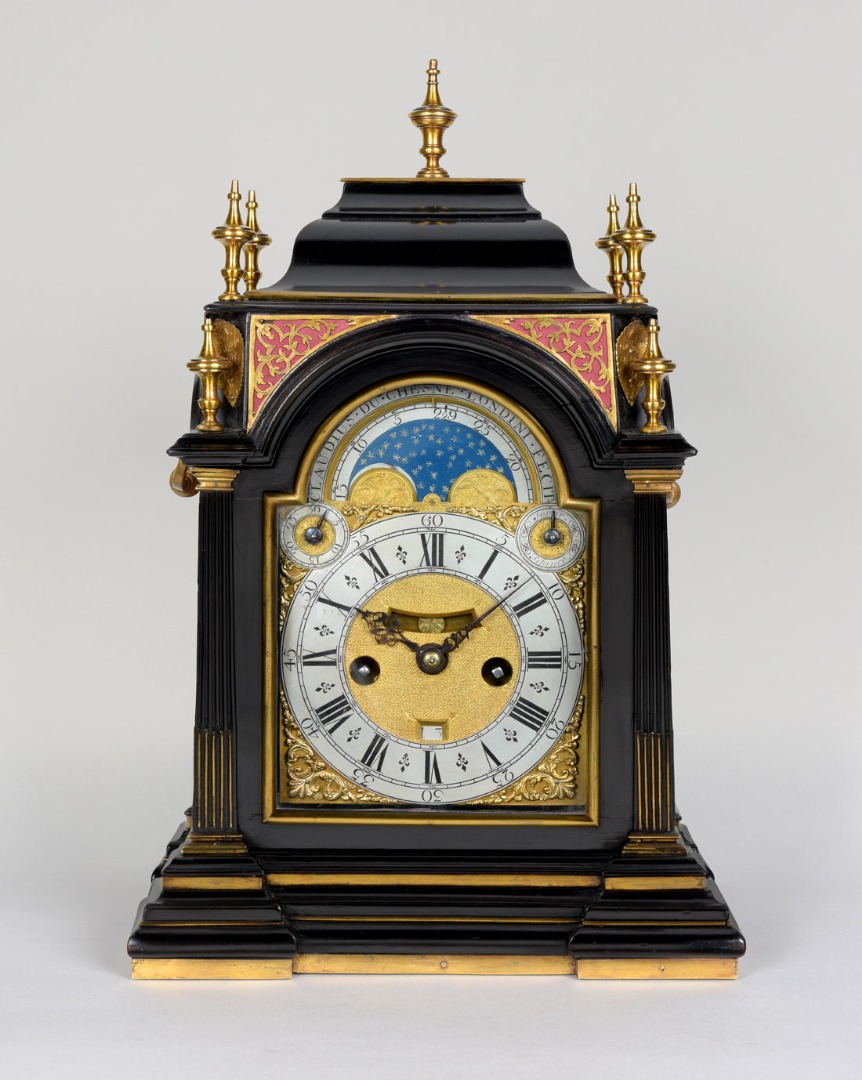 The 8-day movement, which strikes the hours on a single bell, has a verge escapement, short bob pendulum and pull quarter repeatwork on six bells. There is a subsidiary dial in the arch of the dial for the phases of the moon. The maker’s signature Claudius Du Chesne Londini Fecit is on an arched plaque above the moon dial and below it are two subsidiary dials for rise/fall and sonne/silance.

The 5 ½ inch dial has a finely matted centre and a raised chapter ring with fleur-de-lys half-hour markers. The date indicator is inset above VI and there is a crescent shaped aperture for the false pendulum within the dial centre. It has nicely facetted blued steel hands.

The elaborate backplate is profusely engraved with insects, birds, flowers and scrolling foliage, a well-executed wheatear border, a winged cherub armed with a bow and arrow and two cornucopia of fruit.  The lenticular shaped brass pendulum bob has ring turning.

The architectural case is constructed primarily in oak and veneered with ebonised pearwood. It has an inverted belltop with a carrying handle to each side and two sets of four urn finials with delicate brass engraved sound frets to the front and sides. Both the fully opening front and back doors have brass strung reeded pillars with capitals and bases. The case stands on a brass moulded inset stepped base.

The clock has a bespoke ebonised brass moulded wall bracket with a key drawer to match.

*Claudius Du Chesne was active in London in the first quarter of the 18th century. He moved from Paris to London around 1690 and was in the Clockmakers’ Company from 1693 to 1730 when he worked from Dean Street, Soho. He made a number of fine longcase and table clocks and he is generally regarded as one of the finest of the French Huguenot clockmakers working in London.