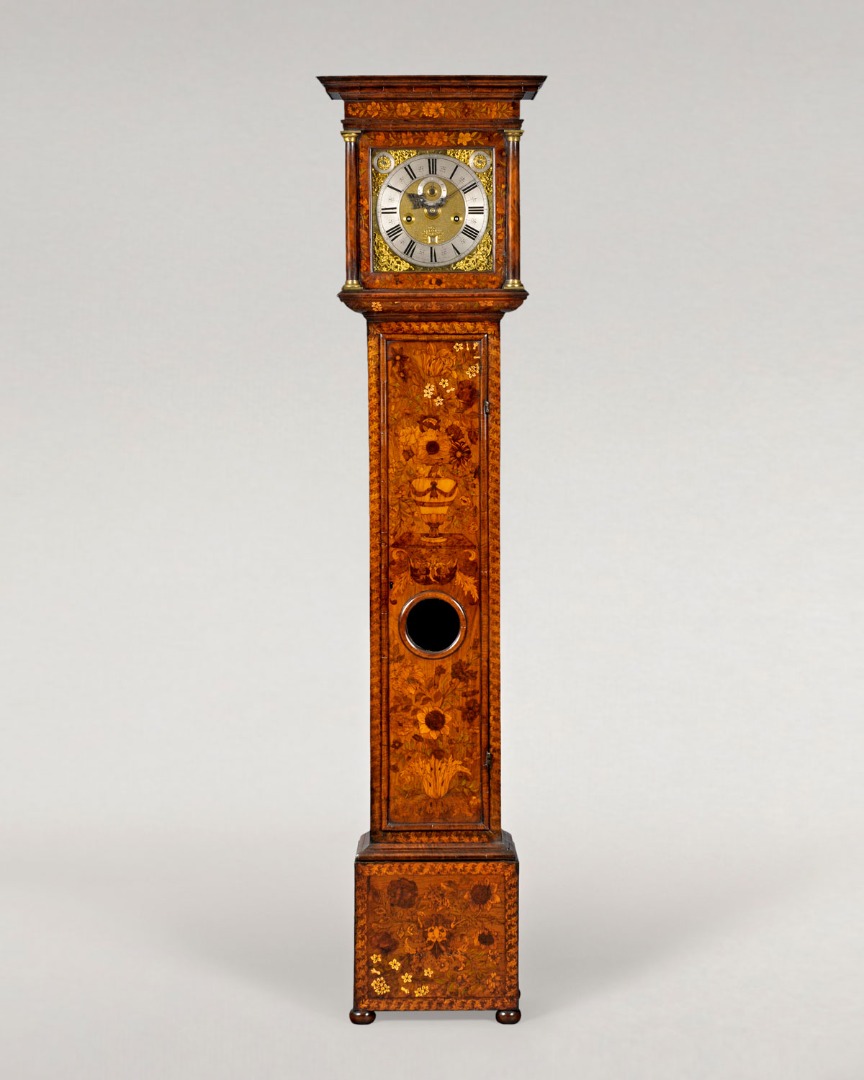 An important William & Mary period longcase clock of month duration and with quarter repeat work. This bespoke and unique longcase clock is in an excellent state of preservation with good colour and very unusual marquetry decoration.

Standing only 79 inches high on bun feet, the case is veneered in walnut with floral and foliate marquetry of various woods around an urn. To the top right corner are white flowers inlaid in bone and this is repeated to the lower left of the base. The leaves still retain old traces of green staining. The rise-up hood is flanked by walnut columns with brass capitals and bases.

The 10 inch square dial is mounted with a silvered chapter ring and subsidiary seconds. There are two subsidiary dials within the upper spandrels, the one to the left offering a strike/silent option and the one to the right, rise and fall regulation to the pendulum to adjust timekeeping. The matted dial centre has ringed winding holes and an aperture to view the day of the month above VI. The blued steel hands are finely pierced and faceted and the chapter ring is signed by the maker, Dan Quare, London.

The substantial, month duration movement is built to the highest quality and includes a pull-quarter repeating mechanism with the quarters sounded on four bells and the hours on a separate bell. This very desirable feature is rarely found on longcase clocks but was on rare occasions used by Tompion and Quare for clients who had a deeper pocket.

The clock is in well preserved  condition and has obviously been cherished throughout its life. The turned walnut bun feet are replacements and there has been some restoration to the quarter repeat mechanism but overall the clock’s condition is remarkable for its age. A very similar month duration pull-quarter repeating movement by Quare was in Part I of the John Taylor Collection.

* Daniel Quare was born a Quaker in 1647 in Somerset. Little is known about his early life, but in 1671 he became a Brother of the Clockmakers’ Company. He was a prolific maker of clocks, watches and barometers, who occasionally collaborated with his contemporaries to make some of the finest clocks of his time. At his best he was supreme and, like his peer Thomas Tompion, examples of his work still grace palaces and museums internationally. He was patronized by royalty and aristocracy and is credited with several inventions. In 1708 he served as Master of the Clockmakers’ Company and soon afterwards took into partnership Stephen Horseman who had earlier been his apprentice.

Examples of Quare’s work can be found at the British Museum, Victoria & Albert Museum, Science Museum, Hampton Court and the Metropolitan Museum in New York.