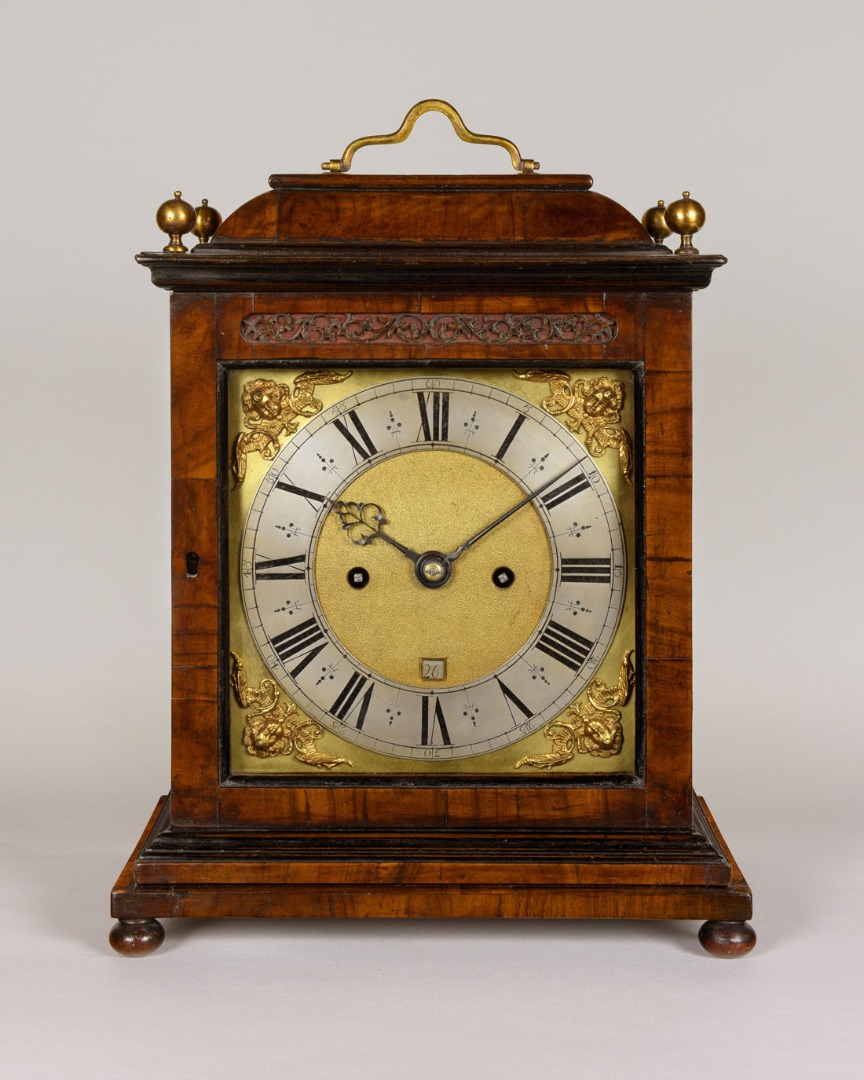 A rare James II period  olivewood table clock with its original turntable base by this fine early maker.

The eight day movement which strikes the hours on a single bell on an outside countwheel has a verge escapement and short bob pendulum.  The beautiful fire gilt 9 inch dial has the early type of winged cherub corner spandrels and a chapter ring with narrow inside quarter marker band and a similar outer band for the minutes.  The blued steel hands are finely wrought and facetted. The date work is inset above VI o’ clock.

The elegant shallow dome top case is constructed primarily of cariniana wood and veneered with highly patinated olivewood and ebonised mouldings. It sits on its original turntable base.  The square dial is surmounted by a finely pierced wooden fret to the entablature.  The shallow top has a Phase I Knibb-type brass carrying handle and four turned brass ball finials.

The superb backplate and apron are exquisitely engraved with tulips and foliage which are typical of the best engravers’ work of the early period. The maker’s signature Nathanael Barrow London is also inscribed within a beautiful lambrequin on the backplate.

* Nathanael Barrow was born circa 1639 and served his apprenticeship with John Betts from 1653 until 1660 when he was ‘freed’ of The Clockmakers’ Company.  He had his own workshops until his death in 1700. In 1685 he was made Warden of the Clockmakers’ Company and in 1689 he became Master.

Early turntable clocks were only made over a very short period and this example is a rare survivor particularly due to the fact that its turntable is original.

B. Loomes, Watchmakers and Clockmakers of the World: Complete 21st Century  Edition, p. 45